Alex discussed training with Egan Inoue, or what I like the call, the most distracting interview ever. Yes, I had to re-watch to pay attention to what Alex was actually saying. He’s looking so relaxed. Damn.

For those who want to learn more about Egan Inoue, the man who trains both Scott and Alex, click here for a fascinating article about him. Here are a few highlights.

After his 10-year career in racquetball, Egan Inoue went on to pursue another love, Brazilian jiu-jitsu. In 1996 and 1997 he became the World Brazilian Jiu-Jitsu Champion and now holds a third degree black belt in the sport. He also holds black belts in Tae Kwon Do, Hapkido, Shotokan Karate, Jeet Kun Do and Japanese Jiu Jitsu, as well as a brown belt in Judo.

When I asked Inoue about his time on “Hawaii Five-0,” he said he had been up for a different role, but after being asked to read a few lines he was given the bigger role of Wo Fat’s bodyguard. While his character didn’t have a name, he was seen in several key scenes with stars Daniel Dae Kim and Grace Park. In his opening scene with Kim and Mark Dacascos, who plays Wo Fat, he was surprised Kim asked for advice on how he would handle a “surprise attack.” Inoue used his instinctive martial arts training to figure out a quick move that he could teach Kim to use in the scene, which was used in the final cut.

Inoue said working with Grace Park in two scenes was also very memorable as she would joke with him, often fixing his tie and his coat in between shots so he could maintain his slick henchman look. Park even stayed in the scene with him so he could deliver his line, “You won’t shoot, you’re a cop.”

Park could have let her stand-in finish the scene, but she said, “No, I want to stay here for Egan, I’m going to help him,” as the scene probably would have played differently for Inoue without her there to help him maintain his character. Inoue also said he played the ninja who broke into McGarrett’s house and stole the box in “Ke Kinohi” in season one.

“I joked with some fans that I know what’s in the Champ Box,” he said. Alas, Inoue was not allowed to share any more information.

For Inoue, training O’Loughlin and Caan is like working with anyone else.

“I don’t treat them any differently,” he said. “They are human and the jiu-jitsu skill is the same.”

He did say that when they have especially hard weeks they usually want to take time to train more and often call Inoue to carve out time so they can train with him. He said O’Loughlin really enjoys training and Inoue will even text him jiu-jitsu ideas to remember and focus on when shooting is especially hectic. 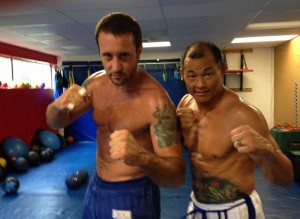