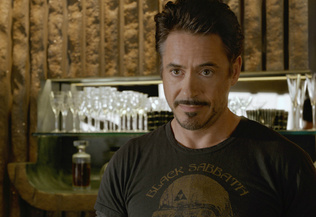 Robert Downey Jr. has signed a deal to reprise his role as billionaire genius/playboy/inventor Tony Stark in two “Avengers” films.

Marvel.com posted news this morning that the actor has signed a two-picture agreement to climb back into the Iron Man armor for “The Avengers 2″ and “The Avengers 3.”

The first “Avengers” sequel will be written and directed by Joss Whedon and is set to begin production in England’s venerable Pinewood-Shepperton facility in March.

“We fit each other pretty snug, and I feel like when I’m him I know what to do,” Downey told Hero Complex earlier this year of his relationship to Tony Stark. “At the same time, I don’t know why I know what to do. I just know that I do. There’s still just a sense of wonder to me that there’s something so watchable about this character’s ongoing, trippy saga.”

(I know RDJ was holding out for a while because the studio was low-balling the rest of the cast when it came to paying them. I hope this signals that everyone else is set for a deal)